OnePlus 10 pro – As we all know that OnePlus always tries to launch the best and latest android smartphone , Recently after several rumors OnePlus finally reveal his latest flagship smartphone OnePlus 10 pro in China.

OnePlus 10 pro is a successor of OnePlus 9 pro which launch last year . If you are thinking about where is OnePlus 10 then , right now there is no news about when OnePlus 10 is going to launch .

The new OnePlus 10 Pro has been designed in such a way that it give maximum performance while gaming or while doing live streaming . OnePlus Company nearly spent 20 minutes in the event solely explaining a feature called Hyperboost .

In the event OnePlus company says that with the help of Hyperboost , It allows you to push the hardware to the limit for gaming purposes .

Further they also said that they added some new tools for Overclocking the CPU . This Means that with the help of these tools you can use your OnePlus 10 pro smartphone CPU at full potential .

These are the key highlight of new OnePlus smartphone , now lets proceed to know the specification of OnePlus 10 pro in Details .

For Photography and videography , OnePlus 10 pro comes with triple camera setup at back which include a 48MP Sony IMX789 with f/1.8 aperture, a 50MP ultra-wide camera with 150-degree FOV and an 8MP telephoto camera with 3.3x optical zoom.

And for Selfies OnePlus 10 pro has a 32MP Sony IMX615 punch-hole Camera which is top left corner . The rear camera of this smartphone are tuned by Hasselblad , which means now you can able to record in 4K UHD at up to 120FPS . 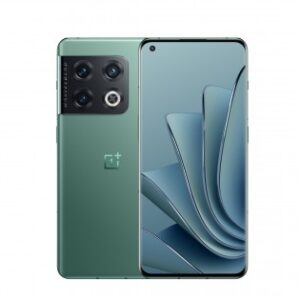 This feature also brings Natural Color Optimization 2.0, which promises the colors will be even closer to real life. OnePlus 10 Pro also has a Pro Mode 2.0 RAW shooting mode .

The New OnePlus 10 Pro has a 5,000 mAh battery that comes with 80W fast wired charging and 50W wireless charging which impressively fast .

In the launch event company said that the new cooling system help smartphone to cool down fast while charging . The OnePlus 10 Pro will come with ColorOS 12 based on Android 12 .

The OnePlus 10 pro launched in two colour variants ( Black and Green ) and also have glass-metal build which is IP68 certified making it dust and water-resistant.

The first Flash Sale of OnePlus 10 pro is scheduled for January 13 .